Bocatec Laser for Greenpeace and „Save the Arctic“

Navigation: Home / News / Bocatec Laser for Greenpeace and „Save the Arctic“

On Saturday evening the 23rd November the highest building of Germany, the Berlin television, became projection surface for Greenpeace and Bocatec. With the lettering „Save the Arctic“ Greenpeace appealed to the Russian investigative authorities to withdraw their charge against 28 Greenpeace activists and two Bild journalists.

Bocatec on the highest building of Germany
For the laser projection on the 368 meter high television tower Bocatec rented an extra hotel room. Two 20W RGB laser wrote then one hour long the message „Save the Arctic“ in a loop on the tower. But then the police discovered the projector location and asked Bocatec to stop the action. 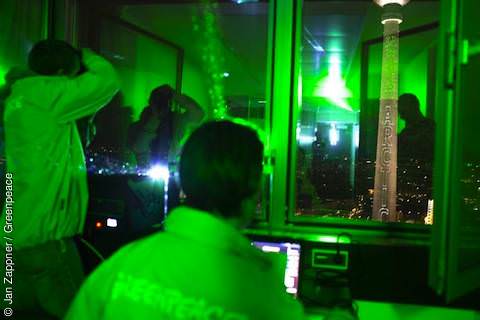 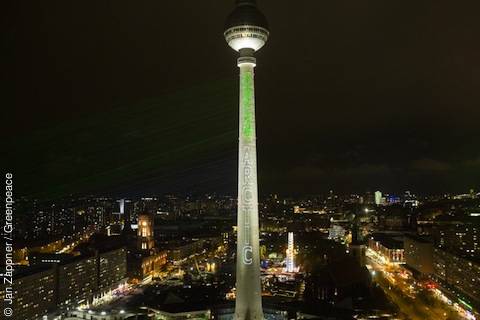 The story behind the mega projection
The 18th September 2013 Greenpeace activists wanted to fix a poster at the oil offshore platform  Prirazlomnaya in the Petschora sea. For this platform operated by Gazprom exists no sufficient emergency plans for a potential oil accident. It is the first platform in the arctic that should convey oil on a grand scale. Due to the rough weather conditions, every bigger oil accident can lead to an environmental disaster.

The peaceful protest action for the arctic that is threatened by climate change and industrialization ended then other than expected. The Greenpeace ship Arctic Sunrise and 30 activists got arrested by the Russian authorities by force without further ado. More than two month later indeed 28 of the „Arctic 30“ are at large on bail, but they are still threatened by multi-year imprisonments. Against this procedure Greenpeace now protest with manifold support, amongst others very public-oriented on the television tower with the help of Bocatec.

„Save the Arctic“ extremely visible and effectual
The projection was a raving success for Greenpeace. Thousands of passerby people gazed at the tower and thus are perhaps now interested to learn about the backgrounds. Everyone who wants to support the release and freedom of Arctic 30 can write a message to the Russian authorities: http://bit.ly/freethearctic30

Bocatec is looking forward to the next eye-catching and brave action with Geenpeace, other projects are already planned.